‘Most of us will only ever dream about it…’ boomed the tannoy over the cheering crowd.

But as Co. Down’s Fintan O’Connor climbed to the top of the Olympic podium in June last year, he’d made dreams come true.

Arms aloft in a victory salute, the Downpatrick sportsman was crowned undisputed golfing champion at the All Ireland Special Olympic Games in Dublin, held at St Margaret’s championship golf course last summer. In fulfilling his own personal ambitions though, Fintan was also nurturing those of others within his wider autistic community.

Fintan’s mum Celine wasn’t even sure what autism was when Fintan was diagnosed. But now, Fintan is blurring all the boundaries between ability and disability, thanks to Down Special Olympics Club.

The club, based in Downpatrick, are using £37,350 of money raised by National Lottery players to continue and expand their work bringing people with learning disabilities together to learn new sports and build relationships. Members are offered a package of Olympic sports and activities including, bocce, football, table tennis, and golf.

Fintan joined the group seven years ago having discovered his talent for golf when he was 15.

“I used to wallop balls down the fields,” recalls Fintan, nodding towards the countryside around his Ballynoe home. 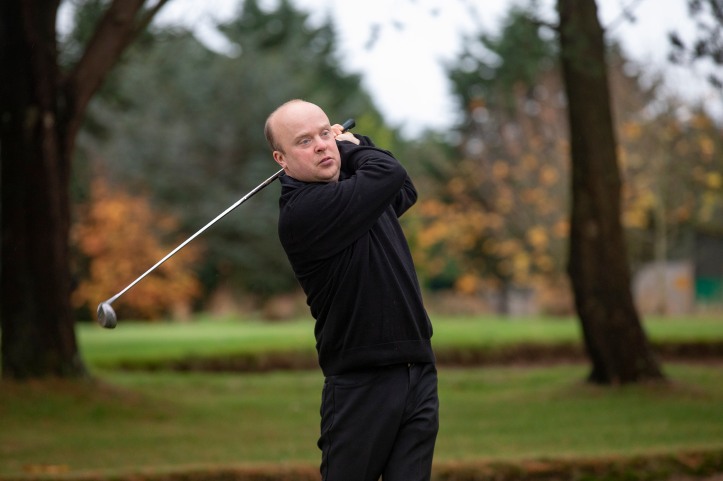 “That bog down there must be full of golf balls,” laughs Celine. “And sure when he was only a wee thing he used to play what he called his Concrete Golf round the yard with the drains as the holes. He even did his own sound effects and commentary!”

Now 39, Fintan’s come a long way from his concrete golf course – and Down Special Olympics Club have played a crucial role in that journey. Celine says being part of the Club has made a huge difference to aspects of Fintan’s life beyond just his sporting ambitions.

“The social and life opportunities the Special Olympics have brought are so important,” she explains. “Fintan has had experiences which otherwise he probably wouldn’t have had the confidence to tackle.

“For instance, going to the Triple Crown in Dublin was something right out of Fintan’s comfort zone. Then he travelled to the Ireland Special Olympics in June 2018 with the rest of the team on the train and stayed with them in accommodation at Dublin City University – we were able to give him his independence and stay in a separate hotel.”

Thanks to National Lottery players, Down Special Olympics Club can provide year-round sports training and athletic competition in a variety of Olympic-type sports for children and adults. This provides them with opportunities to develop physical fitness, experience joy and take part in skill-sharing and friendship with their families and other special Olympic athletes.

Chairman of the group, Frank Donnelly said: “As one of our gold medallists Fintan represents everything which Down Special Olympics is about. The new funding from Big Lottery Fund will enable us to help more people develop their talents, building new skills and friendships.”