When Belfast mum Lisa Hewitt lost her husband three years ago, she struggled cope with her grief. Husband Graham had died suddenly, leaving Lisa and her children, Sophie and Kyle, who were aged just 10 and six at the time. But now with the help of Cruse Bereavement Care’s Get Together – Bereaved Families Discovering project, which received over £670,000 from the Big Lottery Fund thanks to National Lottery players, she’s rebuilding her family and inspiring others.

It was just a normal Sunday in June 2015 when family man Graham cut his finger doing an odd job in the house. The tiny cut would lead to his death less than a week later.

Lisa said: “Graham thought nothing of it. It was only a tiny cut where his wedding ring had dug in while he was fixing a bed. By the Wednesday we assumed he’d taken a really bad stomach bug as he was being sick. Then that evening he passed out in the bathroom.”

Lisa called an ambulance and Graham was admitted to the Royal Victoria Hospital at around 11pm with his wife by his side. From there, events began to spiral out of control.

Graham’s kidneys started failing, but after being moved to the renal unit for treatment he still wasn’t responding to fluids. By the Friday morning doctors started to think Graham’s illness was caused by an infection.

Lisa and Graham’s family were met with awful news at the hospital. They were told that Graham had an incredibly rare disease called necrotising fasciitis.

The condition is a rare and serious bacterial infection that affects the tissue beneath the skin, and surrounding muscles and organs. It’s sometimes called the ‘flesh-eating disease’, although the bacteria that causes it in fact release toxins that damage the tissue.

It’s thought to affect an estimated 500 people a year in the UK.

Lisa said: “Most doctors will only see it once in their careers, if at all. The consultant who treated Graham told me that he’d only seen it once before and he’d been a doctor for 35 years.”

The medical staff did everything they could to save Graham while Lisa and other family members maintained a vigil at his bedside.

“He died at quarter past four on the Saturday morning after the machines keeping him alive were turned off. All our family were there when he passed away. I got to be there with him at the end, I held his hand, I talked to him.

“I just told him how much me and the kids loved him, and how loved we felt by him. Everyone was with him and that’s the best we could do for him.”

Stunned by grief, Lisa, who had been with Graham since she was 15, muddled through the next few days with the support of family and her and Graham’s wide circle of friends.

“You just go into survival mode after something so shocking and traumatic happens and all I wanted to do was protect the kids.

“I went into about four months of operating on auto pilot. I put my grief to the side because I just had to focus on my kids. I just kept thinking, pull yourself together, your children have lost their dad, they can’t lose you too.

“My mum got very worried and said, you’re not grieving, you are coping too well.

“I just thought, if I don’t do something, I’m never going to leave this house.”

Encouraged by her mum and other family members, Lisa got in touch with Cruse Bereavement Care in August that year. The group work with Corrymeela Community in Ballycastle to offer individual and whole family support as part of their National Lottery funded project that’s helping families like Lisa’s come to terms with losing a loved one. The project gives families the opportunity to meet others facing similar issues, and Lisa and the kids went to a family activity day at Oxford Island in December 2015. 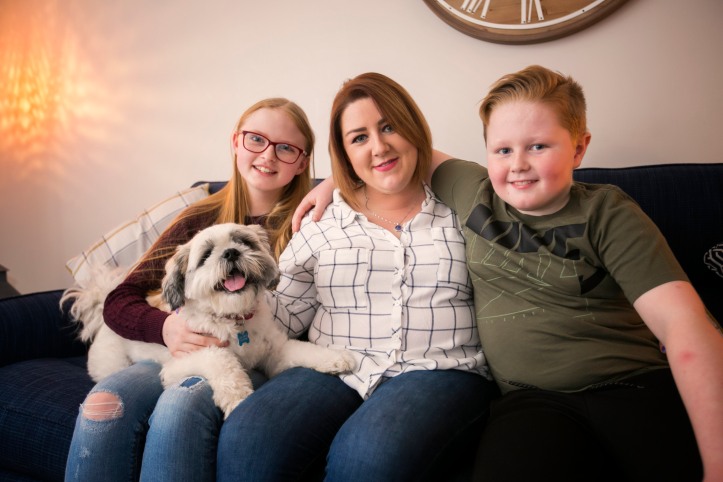 “I was petrified coming in. But we were immediately teamed up with Keith, who had lost his wife to cancer, and his sons Leon and Seth, along with a Corrymeela worker and a Cruse volunteer. The first activity we did was a treasure hunt – it was raining but we didn’t care! It was lovely. The kids just got on so well. It was the first time since Graham died that I’d seen my children being children.”

Since then they have continued to be involved with the project and they have been on more weekend residentials at Corrymeela Community.

“Friends and family do their best but they are tip toeing around you and they don’t really know what to say. But when you walk into Corrymeela and meet other people in the same position as you, the conversation starts off so many steps ahead, because you understand each other,” Lisa said.

Although things will never be the same without their husband and father, life is starting to look a little brighter.

Lisa said: “Everything we do now, I’m always aware that Graham’s not with us. But I know we are doing what he would have loved us to do as a family.

“I bought a caravan because he always wanted one. Now the kids love it. We got a dog called Ted who we just love. I just thought, my children will never miss out on anything because Graham isn’t here. We have all the wonderful memories of him, and the amazing, kind-hearted, loyal, funny person he was.”