TinyLife are making a big difference!

When Fianna was born at 23 weeks in December 2014, she weighed just 1lb and 2oz. Fianna was one of around 60,000 babies born prematurely in the UK every year, and doctors warned her parents to be prepared for the worst. It was a frightening time for new mum and dad, Aurla and Feargal Ward. Thankfully, the staff at TinyLife – Northern Ireland’s only charity for premature and sick babies – were on hand to support the family. TinyLife are funded in part by money raised by National Lottery players, and their support was crucial to Fianna and her family.

“When Fianna was born we didn’t know if she would survive or not,” says mum Aurla. “She was only given a 20% chance of survival.

“Although she was very immature, they went ahead and tried to keep her alive. The next days and weeks were so hard because we didn’t dare think she might be OK.” 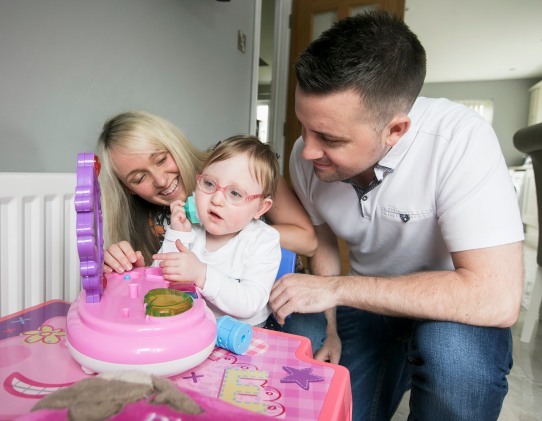 Because Fianna was so sick, she needed specialist care in the hospital for months after her birth. This meant her parents weren’t able to bring her home. After making small progress, Aurla and Feargal received some more bad news. Fianna had an eye condition and there was an 80% chance she could lose her sight.

Throughout this process, Aurla and Feargal got support from TinyLife. Thanks to National Lottery players, TinyLife are able to provide advice, equipment, and emotional support to parents of premature babies.

The May after Fianna’s birth, Aurla and Feargal were finally able to bring their baby home. But the challenges didn’t stop there. Thankfully, neither did TinyLife’s support.

“After all we had been through and having her home I just wanted to be like a normal mum and take her out and about but I couldn’t.

“TinyLife then offered us lots of support and now two years on we are still involved as we take part in their TinyStart project.”

Thanks to National Lottery players, the charity is working with Lifestart to offer support and child development activities for premature babies and their families from birth up to age three in the Belfast, South Eastern and part of the Western Trust areas.

If you want more information on TinyLife or the National Lottery funded TinyStart project visit: www.tinylife.org.uk.