Niamh, Woodlands Beacon Centre – what they did with the Big Lottery Fund 10th Birthday grant

The Northern Ireland Association for Mental Health or Niamh,  supports people with mental health issues across Northern Ireland. They are using the £10,000 Big Lottery 10th Birthday grant to improve their Beacon Garden in Cookstown.

The project is buying seeds and gardening equipment, providing a level one qualification in horticulture and adding a shelter for the wetter months.

This garden project started from an idea by one of the Niamh members in Cookstown. The local council allocated them a piece of unused land and local teenagers from the Prince’s Trust helped clear and prepare the land. 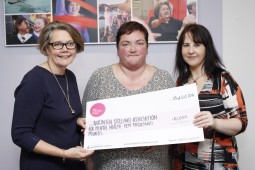 She was ‘over the moon’ to be told they had won £10,000 and she attended the awards ceremony with Niamh staff to receive the cheque from Big Lottery Fund NI Director Joanne McDowell.

The garden project has been growing with the new funding and has become a fully functional therapeutic garden. Several Niamh members are also currently doing an OCN course in horticulture.

This project started from an idea from one of the Niamh members last year and grew into a fully functional therapeutic garden that is a valuable resource for the organisation.

The local council allocated a piece of unused land at the side of the centre for the project. Local teenagers from the Prince’s Trust helped to clean up the land and make it a safe piece of land for creating a garden. They also created some murals to make the area more attractive. The next step was securing funding to get the project off the ground,  and this part is told below by Niamh member, Norma Harkness.

Highlight of My Year

I have been coming to Woodlands for a few years now, and I have times in my life where I don’t know where to turn and I feel I have no way out.  I come to the centre and here the staff and other members treat me as a somebody.  It is here that I can feel normal and know that I will get support for what I am going through.

My father is a farmer and we have grown up with an appreciation of the land around us. I have taken part in courses as part of Beacon, but I am really interested in the new garden project.

I saw an article from the Big Lottery Fund last year asking for people to nominate a charity or service that they feel would be deserving to be placed in a competition for one of the top ten Big Lottery Fund prizes of £10,000. I wanted to nominate the centre for this, so I wrote a letter detailing my experience within the centre.

I was so happy to hear that we had been shortlisted and spoke to Dorothy, who said that the next step in the process was an application which we talked about could detail how we would spend the money on the garden, we talked about a gardening group who could do a horticulture course and also the possibility of a new shed, lean-to etc.

Dorothy and her colleague filled in the form and to our surprise a few months later we heard that we had been chosen as one of charities to receive funding. We were over the moon!

Dorothy asked me if I would like to attend the ceremony in Belfast to receive the cheque and I said yes. We had a great day and met other people who had won, for other great causes.

The garden project has been growing with the new funding, and me and eight other members are currently doing the OCN level two in horticulture which is teaching us so much.

I am so glad I wrote the letter and really love the Beacon garden.